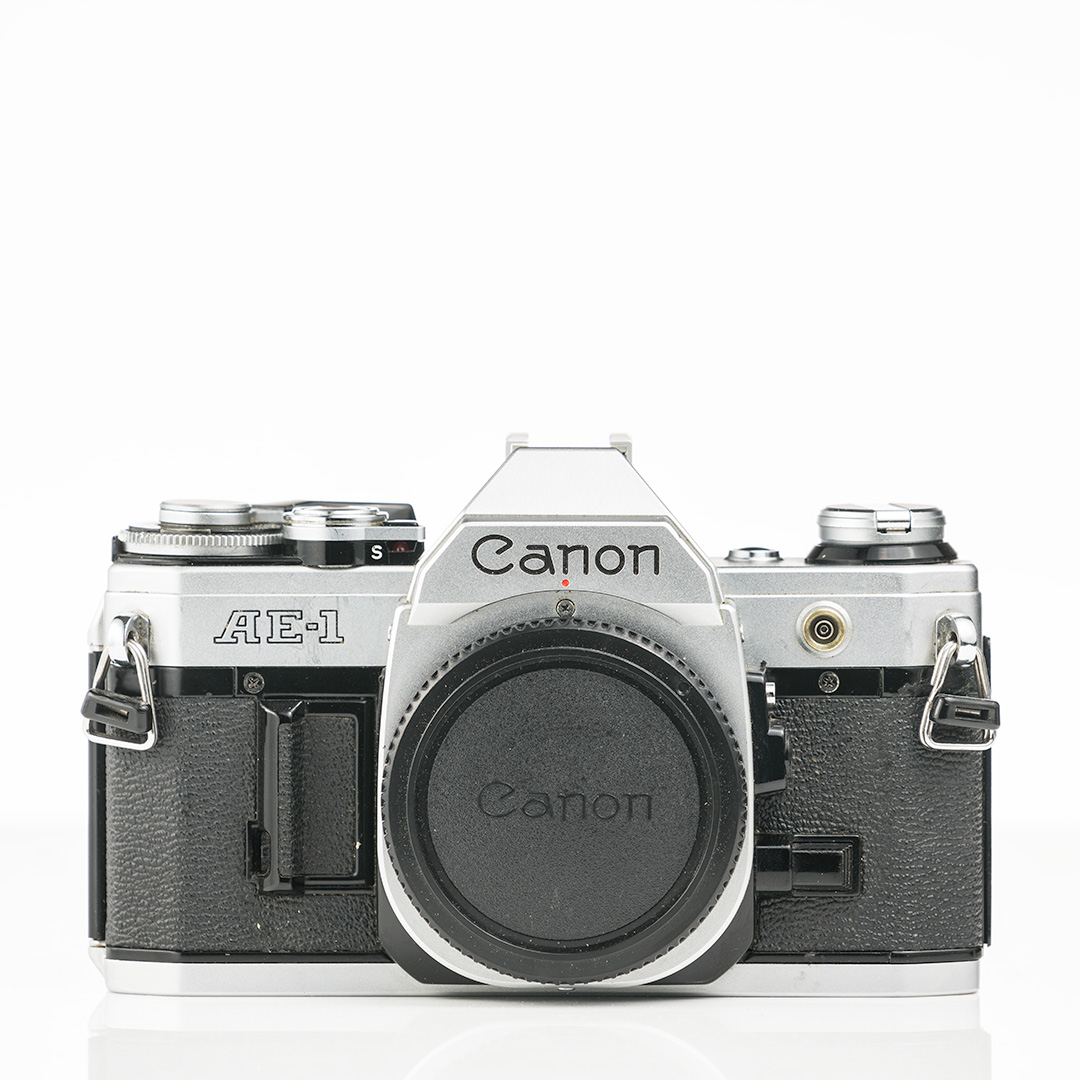 This was my first "real" camera. I bought it new in 1978. I took thousands of pictures with it for the 12 years I used it. It took a beating from many backpacking trips, but always worked perfectly. The AE-1 has a very accurate exposure meter. The viewfinder is bright and focusing is easy. This is a basic SLR with limited features, but that's what makes it such a fun camera to use. It does not have an AE Lock like the AE-1P, but instead it has a backlight button that opens the aperture 1 and a half stops for back lite scenes.
I would prefer an AE Lock instead, but other than that this basic SLR had all I ever needed to take some great pictures. I currently have one in mint condition that I use for black and white. Its just a fun camera to use and the classic looks really stand out. I will continue to shoot with my current AE-1 until I can no longer get film!

Features
8.0
Build
7.5
7.8
The LARGEST SELLING SLR of the time - A BIG Commercial Success
Good for it's time. But cannot be compared to F-1's

The AE-1 camera was launched in 1976 by Canon Co., Ltd. and employed electronically controlled shutter with cloth curtain and shutter-speed-priority AE system. Since the camera was equipped with automatic winding mechanism and continuous shooting mode with the Winder-A (which was an option), it was a big hit, and it is said that it was sold more than four million five hundred thousand worldwide.

The original AE-1 was lacking a programmed AE mode. Users generally realized the convenience of the Program AUTO. In fact, the early eighties was the era where full automation in camera design really took off.

It revolutionized many of the concepts for future camera designs especially in the field of electronic applications and mass produced technique with a lower cost of production with the use of plastic injection molding, resulting in simpler assembly of parts. It also popularized and made devices like Power Winder and electronic Speedlites a household name in the consumer market.

The camera was controlled entirely by electronics precision rather than by mechanical functions - and depends solely on battery power for all of its functions. Despite defying the mainstream camera design concept in the '70s, the AE-1 came through well and attained a huge during its availability years. This was very much due to Canon's efforts in promoting the camera - it offers very precise and stable timing of shutter speeds, which was also extended to other areas like auto flash-synchronization speed when any dedicated Canon electronic Speedlite is used.

Although the technologies employed within the AE-1 looked very simple when compared with today's modern SLR cameras, it has to be remembered that during its era, the market was still dominated largely by those heavy, mechanically-controlled type of cameras. Canon used these points to enhance the advantages of electronic applications in camera designs - where in many areas, electronic cameras do offer much more precise timings and other features that can never be matched by mechanical technologies.

However, the AE-1 was not in anyway a professional-grade SLR as compared to the Canon F-1. It was generally regarded as a classic and top amateur SLR model due to the impact it has created with its then innovative concept that went on to influence other future camera designs, both Canon and other makes, of the industry as a whole. The camera was eventually replaced by a newer model with added features, the AE-1 Program in 1981, following on the success of Canon's semi-pro and top-of-the-line A-series camera, the multi-mode Canon A-1, which made its debut in 1978.

Frame Counter Counts up. Resets automatically when camera back is opened.

The reviews prior to myself have pointed out there is no full Auto mode. This doesn't bother me in the slightest. In fact, Shutter Priority is quite nice; it gives a good level of control and is good practice more than anything. If you want full Auto, just get the A-1 instead. Really, this is no big deal.

This is a great little camera. I've had mine for over a year and run a fair old few rolls through it. One of the biggest advantages of the camera is the price. I picked up mine for £40 with a 28mm. Quite a steal, even if later on I had to replace the light seals. If you do buy one, check this first. It's not a difficult replacement job, you can DIY, but it's an inconvenience.

It has a very nice viewfinder, both big and bright. I find I tend to use the matte screen more than the split-prism, but it is a very useful addition just for the getting the focus spot on. It is always incredibly easy to focus with this camera, no matter what lens you use.

And that's another big plus. Canon's FD lineup is excellent, with all the lenses you could possibly ever need for a fantastic price. Some of the L series lenses hold their price very well, as well as some of the more desirable lenses (85mm springs to mind) and they may be a bit expensive, but most are very reasonably priced for the quality.

Metering, like I mentioned before is no biggy. It would have been nice if Canon could include a metering system for use in Manual mode, and the little blinking "M" is a bit annoying. Metering is most commonly confused by backlighting, even mild. This can be quite frustrating at times. Overall though I've found mine to be pretty accurate.

My only niggle is that it is very light, not great for low light and slow shutter speed situations (my big heavy Leica R3 is a champ in those conditions) and the body does feel a bit cheap. Otherwise, great camera for a beginner

Features
8.0
Build
8.0
8.0
very light, very fast to use due to simplicity of functions, reliable
can be hard to read the meter needle in low light

I consider this a pocket camera. It is a very well-built simple reliable shutter-priority or manual exposure control manual-focus SLR. The batteries last ages and are easy to find, the repair or replacement costs are still very low, and it is an excellent lightweight alternative to the bulkier F-1 and a good backup body in case you need the assurance of an extra body for an important shoot.

I used one of these cameras for 90% of the photographs that were in my first public exhibit in Prague in the early '90's. It was a perfect camera to carry with me everywhere because it was very light and I was never afraid of it being squashed or damaged by casual knocking about. If you think you might be trampled by a stampeed of bulls while shooting in Pamplona, maybe get yourself an F-1 (or, to be really honest, a Nikon F3 - sorry about that), but if you are going to be trekking and hiking and taking public transport and eating here and there and taking boats and planes and trains and backpacking and climbing and going out at night and shooting sunsets and sunrises and walks and forests and campfires, there really is no reason to get anything more high-tech, more sturdy - or more expensive - than this little camera. Short of taking it on a lunar mission in other words it is a camera that will serve you well in all situations.

The controls are very well placed, it is very lightweight and yet has a very reassuring solid feel - which is not just a matter of casing; it really is very solidly built with lots of substantial mechanics inside - and it has an excellent metering system and is easy to use. In short, if you want just one camera for the Canon FD system and want to watch your budget, get an AE-1. It will cost you less than an A-1 or F-1, and will be easier to repair or replace than any of the other models because they made five MILLION of them which leaves an ocean of spares circulating out there in repair shops.

Canon promoted this camera well, and there are literally millions of them still floating around; so an AE-1 might be the most accessible entry point into the FD lens world. (Many excellent FD-mount lenses are going for bargain prices today, because they can't be easily adapted to DSLRs).

In terms of size & weight, the A series slimmed down quite a bit from the earlier F's.

A real strong point of this body is a viewfinder, which is exceptionally large and bright. It seems like I see a lot of AE-1's with the viewfinder eyepiece cracked, so its design might be unusually vulnerable to damage. The eyepiece diopter is a perfect match for my mild nearsightedness, unlike a majority of camera viewfinders.

Considering how popular this model was, it's surprising that the handling has some weird rough patches. When you meter in manual mode, a red "M" blinks at you annoyingly the whole time. The shutter speed dial is a little too easy to bump off your desired setting, just from picking up the camera.

While I personally prefer aperture priority, the autoexposure of the AE-1 is shutter priority. Action photographers might argue it the other way of course. Beginners who don't have a handle on the aperture-DOF connection might find shutter-priority auto easier to understand.

There's no getting around that it's a late 70s camera. Shutter priority isn't difficult, but I do miss having a fully automatic or an aperture priority mode - along with the difficult-to-see Aperture display, and the kind-of-annoying ISO dial, that's probably enough reason to opt for the very similar AE1P over the AE1.

Camera will start squeeking and then not working if left unused more than a decade, so if you have an old one or buy one off EBay (I've done both) expect to do a $50-$100 refurb job. Aside from that I've found the camera solid, I've given it more than its fair share of knocks and drops and it hasn't had problems.

The metering isn't bad, but it's kind of a learned skill to use center-weighted metering properly. The metering is blown away by any camera, film or digital, that's been released in the last twenty years.

I'm not much of one for using flashes, however with its fixed 1/60 shutter speed with flash, and other issues, I just pull out another camera if I want to use flash.

But really there's just a list of small annoyances. This is basically a very good camera that just gets out of the way and let you take photographs.