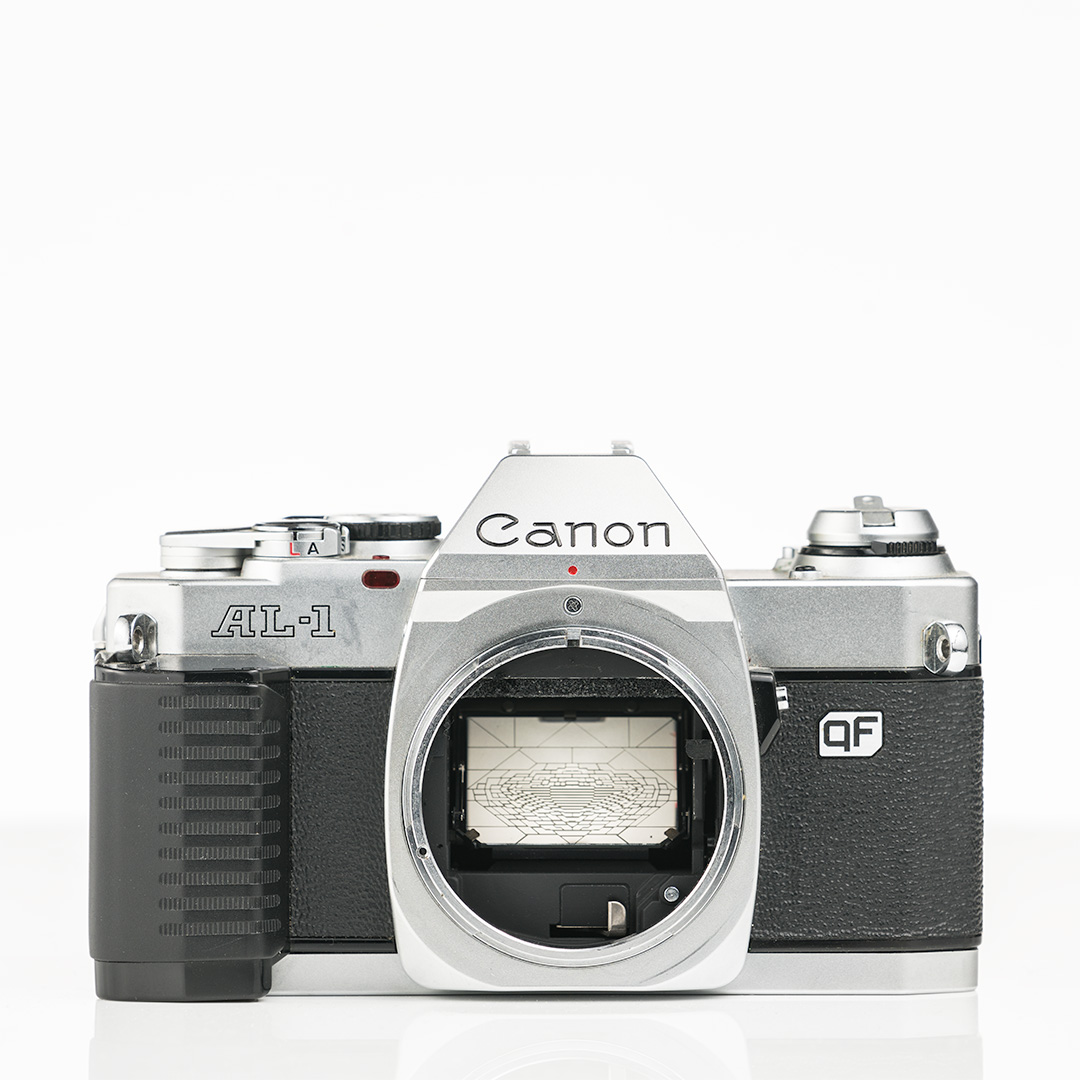 Features
8.0
Build
6.5
7.5
An SLR with an electronic rangefinder to provide focus assistance. Easy to Use.
A bit late on the market. Not an Auto-Focus! Has battery Door Issues! Amature design

The AL-1 is not an autofocus camera, but rather an SLR with an electronic rangefinder to provide focus assistance. The first AF camera from Canon was the short-lived FD mount Canon T-80 introduced in April, 1985 ('Short-lived' because it was discontinued slightly over a year later in June, 1986 - because for AF it needed special lenses - only 3 were made)

The AL-1's in-focus indicator was quite appealing to the consumers who have eyesight problems or need further assurances regarding in-focus confirmation.

The QF feature provides an electronic rangefinder system which has easy-to-see arrows that points the direction of the focusing ring of the mounted FD lens. A green spot lights up when the subject is in sharpest focus. And because the Quick Focus employed a TTL (through-the-lens) system using three CCD line sensors, virtually all of Canon's interchangeable FD lenses can take advantage of the focus assist feature found in this model.

-It functions with any of the FD Lenses - wide-angle, telephoto, zooms, or macro lenses

-Simple to use, easy to command - light weight and compact in size.

I have been the proud owner of an AL-1 for 25 years now. It is the best camera I have ever owned and being somewhat of a collector I own several including latest digital SLR. The build quality is just phenomenal. Even now, when I am really pressed to make good photographs, I will reach for the Al-1 which I know will never let me down. It was there when both my children were born, when my friend got married, when I went on a several world tours, hikes in the mountains and with many other opportunities. Maybe if I had more money back in 1984, I would have bought an A-1 or a AE-1 program. But I never regretted buying the AL-1. It is much easier to focus than any split screen, and I'm convinced focusing is more accurate than any auto focus can be. Yes I know there were better cameras then with more features but for what I could afford and what I needed those days, it was the best.

I did have a problem or two, when the camera was brand new, the film counter didn't work, and the body was replaced with a new one by the dealer. Then at some stage in about 1996 or so, the battery door latch broke. This was quite a setback because it was impossible to find parts. I found a website which described a neat solution, and I spent a Saturday fixing my old pal.It is a common problem on these Canons and various solutions to the problem are offered on the internet.

As for battery drainage, no problem, a set of fresh AAA's lasts me three to four years with average use.

Back in 84 I was eager to experiment and for this the AL-1 was perfect though it has some limitations (shutter speed only down to 1/15 second on manual). But, no problem, alter the ASA up to the point where you can judge exposure on B setting (about one second if you're quick). I did some real fancy photowork in those days.

All in all a worthy friend for life.

The AL-1's quasi-auto focus system is quite effective in practice, except in very low light, but the ground glass is good enough to focus on anyway even though there is no split-image rangefinder, so really it isn't so useful except perhaps for those with eye-sight troubles and lenses with small maximum apertures.

AAA batteries is a nice feature compared to the expensive batteries of other canons somewhat offset by fastish drainage. The camera has to be 'locked' else the batteries continue to drain: easy to forget. The manual says you can't use NI-Cad so one can perhaps assume that the 1.2V of NIMH is no good either. Thank goodness the batteries aren't also winding the film. Perhaps this just needs ISO compensation as with Canonets: the manual doesn't say.

Glasses wearers are better off with this camera than many others due to the unusually low viewfinder magnification and so better eye-relief. Canon a-1 giving you eye-strain? And lets not forget the migraines you get from the Pentax ME Super's famously large viewfinder.

Portrait photographers will be overjoyed by the clear viewfinder: no rangefinder to get in the way of your off-center composition. Unfortunately neither is there a DOF preview button for previewing the degree of oof background: but you can simulate that with FL lenses, if flare isn't a problem, which work seamlessly in stop-down mode (no fiddling with buttons and presets: just take the picture as if it were an FD lens).

There is a backlight compensation button: upping exposure by 1.5 stops. Any other adjustment has to be done through the ISO dial which is fiddly and not very practical and has a fairly limited range. However the backlight button covers snow and portraits, and after all you do have full manual. If you don't live in a country with rapidly changing light (ie. cloudy) and are not shooting slides then all should be well.