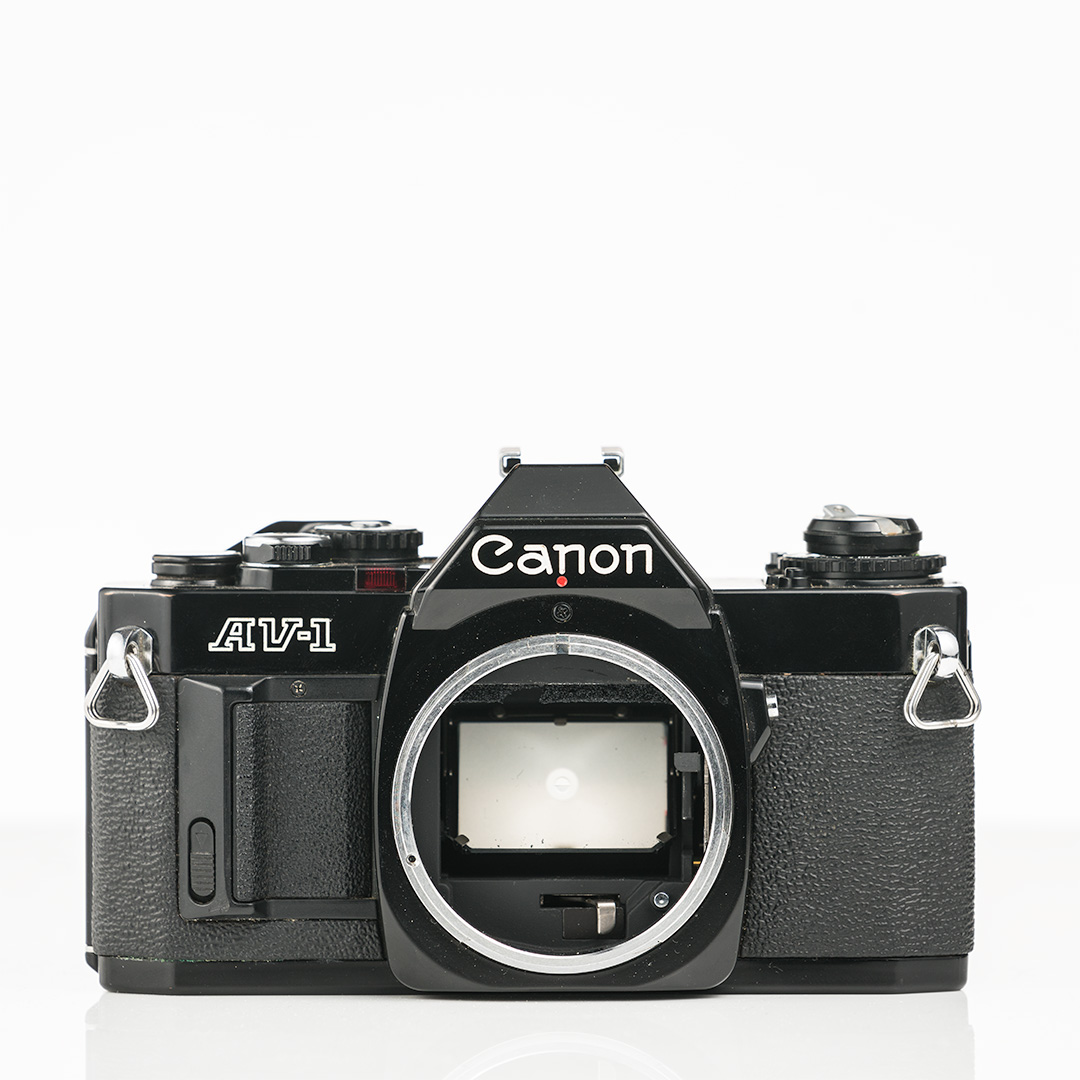 The AV-1 was one of the few Canon bodies that offered Aperture Priority AE mode instead of the more familiar Shutter Priority AE, an autoexposure feature that the camera manufacturer is very popular with. For those who enjoy such simplicity of operation, the AV-1 camera is good enough to be used for most of the common photographic applications. I believe the Canon AV-1 is an extremely well made SLR camera, and it offered a good performance for its price..

There was some strength and weaknesses in the camera design as well, the most noticeable was still the use of the outdated horizontal travelled fabric shutter curtain design since its usage can affect other specifications such as the maximum sync speed that could be offered.

Although Canon has highlighted the point where it is important to have the appropriate shutter speed to achieve a sharp picture and prevents blurred pictures that will be created due to unsteady camera movements, the Aperture priority AE mode still has its place in Canon's stable. In fact, other than Canon and Minolta which offered both Shutter-priority and Aperture-priority AE in one of their respective models, the other major camera manufacturers only have aperture priority AE as the prime automation for exposure control for their models until the mid-80s. Any AV-1 user can guess what the initials stands for - Aperture Value, which were also used by Canon to signify the Aperture-priority AE mode in all its cameras having this mode, including the models in the EOS System.

Even though there were more technicalities involved, the other way around should be more logical - because with electronically-controlled shutter, stepless shutter speeds like 1/189 sec or 1/25 sec can be made possible while mechanical aperture value control can never be made stepless or to such refined values as the shutter speed (However, the later Canon EOS System made it possible to do so). Well, that was a fussy remark because most of the time, other than the usage of less tolerance slide film, the printer in any of the numerous one-hour color lab can create more damage to your final print than the little exposure variation we are talking about.

All you need to do is turn the aperture ring on the lens to set an aperture, focus and press the shutter button. The camera does all the rest - provided the main control dial has been set to the "A" mark.. When shooting your subject under backlighting condition, you only need to push an extra switch to compensation for the exposure (Add more light to a backlit scene to make sure the eventual photograph won't turn out too dark).

The AV-1 uses Centre-weighted Average as its metering option. For excessive backlit situations, using the backlit compensation button may not be enough to provide the adjustment needed to ensure a correct exposure. In this case, move in closer to the subject until it fills up the frame (or when the brightly-lit area is hidden), press the backlit button, lock in the setting by maintaining finger pressure on the shutter button halfway, move back, recompose and shoot. Alternatively, if you are shooting with a zoom lens, just zoom in and get a close-up meter reading, lock it and zoom back to the focal length where you want to shoot the subject at.

Features
7.0
Build
7.0
7.0
very light, a great street shooter, especially in unobstrusive black.
would rather have had an exposure compensation dial, rather than idiot button

I have two silver AV-1's bought used. This is a well made camera with a small feature set. There are five exposure modes. In all of them the user sets the aperture. They are: aperture priority, 1/60 s for flash, then both of the above with self timer, and lastly bulb. Exposure compensation is an awkward button near the lens mount which adds 1.5 stops of exposure. No DOF preview. A needle in the viewfinder indicates the shutter speed selected by the camera (or the battery voltage if the battery test button is pressed). The battery cover/finger grip is a unitary design - not the horrible AE-1 arrangement which combines a door that breaks with a detachable grip that gets lost. For long lenses (say 200 mm or longer) shutter priority makes sense but for anything shorter this is a great, affordable body.