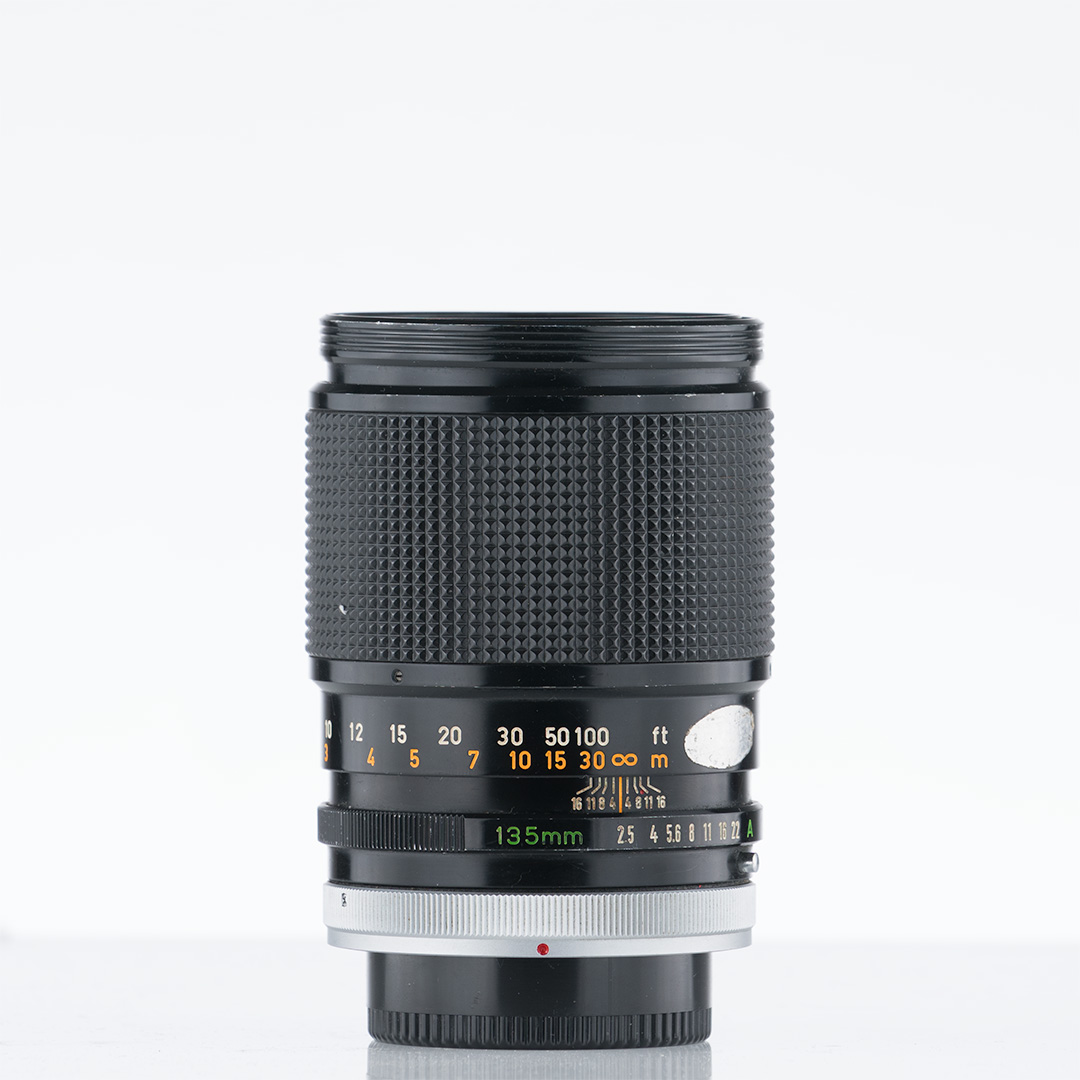 This lens is great for the concertphotography I do. I never leave for a concertshoot without it. More than sharp enough wide open at f2.5.
It also makes fantastic portraits. The build-in hoods prevents I have to struggle with loose screw or clamp hoods. I think the only better 135mm lens is the nFD 135 2.0 but is do not know if the difference is worth the amount of money.

Excellent lens with beautiful rendering and incredibly useful control over shallow depth of field. Reasonably sharp wide open, and completely usable (just a touch of softness, less softness than most 50mms wide open), sharpens further at f/4, no reason to stop it down further unless you want more depth of field. Useful built in lens hood.

I find this focal length to be very close to what my eye sees, so framing up shots is very natural-feeling with this lens. Has a long reach but not too long, and can be used in lower light.

One of my favorite lenses, out of about 20 I've tried. Probably the best inexpensive FD lens.

This is a very unique lens. It show some residual spherical abberation wide open that makes beautiful smooth tones for portraits yet when stopped a couple of stops it's brutally sharp. Beautiful build quality. I wished it focused closer but I carry a thin extention tube and that solves that problem. I find the bokeh smooth and attractive. A must have lens for the portrait photographer.

I can't comment on sharpness as I've not used it at smaller than f/4 and also this lens is supposedly designed as a portrait lens to be somewhat soft anyway.

It has neutralish bokeh when I was rather hoping for ultra-smooth; but it's nice enough anyway. Also at full aperture the bokeh swirls, so I am careful to choose my backgrounds carefully or make sure the out of focus (oof) background is total obliteration. The 8 aperture blades also keep the bokeh highlights nicely rounded rather than objectionably geometric.

The built-in hood isn't enough to avoid flare when doing back-lit sunlight portraits despite the SC coatings. I haven't experimented so far but on one occasion I did have to tape on some dark coloured paper to extend the shading: usually I would use my hand but it wasn't enough with this lens the flare being quite visible in the viewfinder. Considering my preference for these kinds of shots an SCC lens would perhaps be preferable.

Wonderfully a lever on the lens's mount could be switched to operate the lens in stop down mode. It hasn't damaged the camera, an AL-1, though the manual recommends against this without saying why (not so easy to mount: you must slightly turn and click the aluminium ring before). This allows me artistic control of the bokeh without the inconvenience of a dof preview button which my camera doesn't have anyway. Marvelous!

When in open-aperture metering mode the aperture was easy to jolt down without being noticed. Bad news when using a film camera but it may just be my particular lens. However in stop-down mode it's less easy and anyway irrelevant.

It has rather a long focus throw. It also has a 1.5 metre minimum focus; pretty stingy and a bit odd for a 135mm portrait lens. An 85mm already does head and shoulders but that's as much as you can do with this lens. Barmy! At least it's (marginally) cheaper.

Strangely one click down (f3.3?) shows a whole 1 stop metering change and the same from that to the next, f/4. Bizarre. In any case it's not really an issue for a portrait lens. Funnily enough it's portrait sibling the 55mm f/1.2 (both the FD and FL non-aspherical) is something like T/1.7 wide-open!!!!! The 55/1.2 is a big con really. The 135/2.5 seem to have the opposite going on which I thought impossible.

Not a flawless lens and considering the bokeh wasn't as good as I hoped - and swirly - I think I might have been better off with a 135/2.8 SCC with better flare control and a shorter minimum focus. But I can live with it.