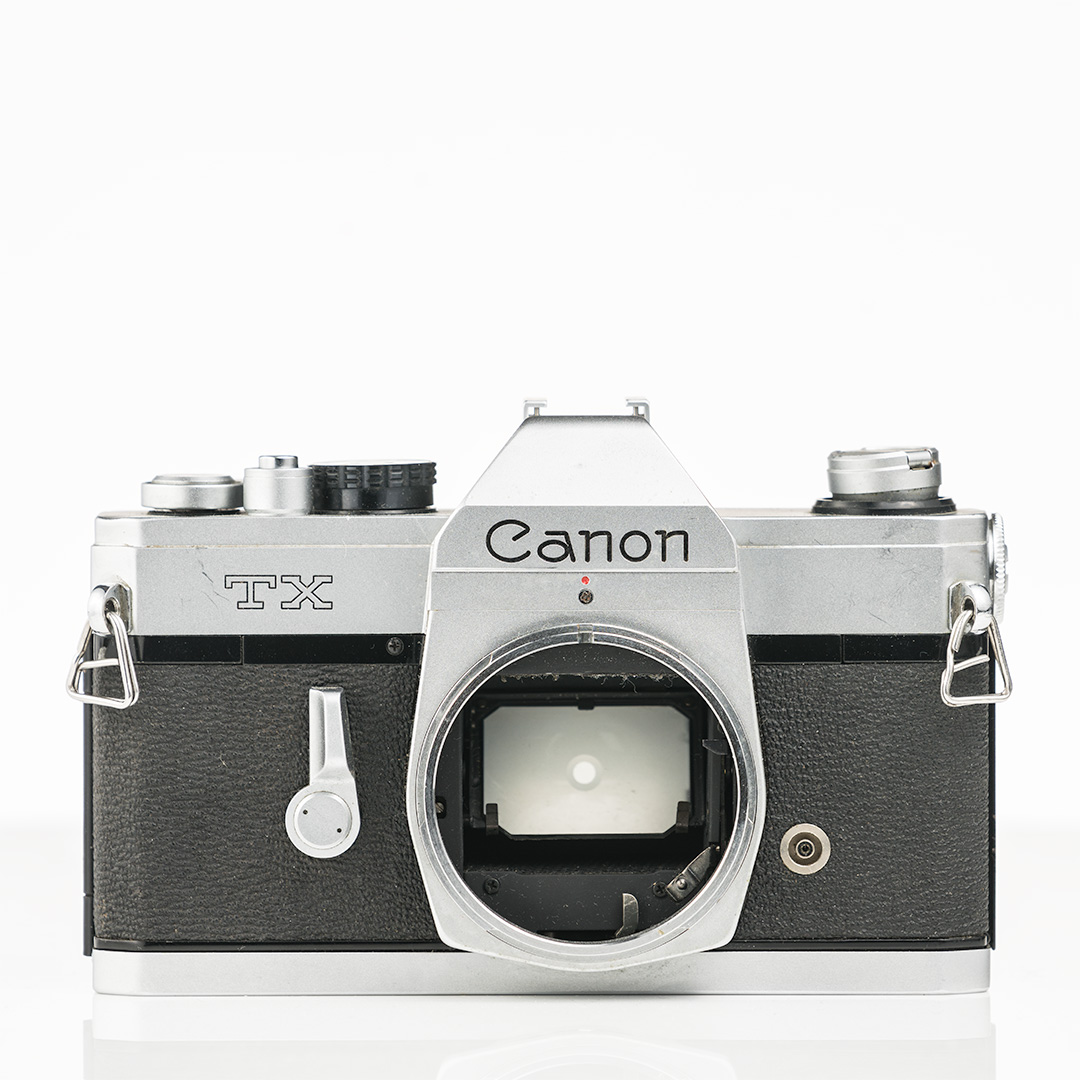 Features
8.0
Build
9.0
8.3
Shares the same basic virtues as all other Canon F series cameras.
No meter switch. Lacks self timer.

I have owned and operated several Canon F series cameras over the years. My first "good" camera was and is my Canon FTb. I owned an F-1 which I gave to my son. My current heavy duty Canon is my EF, which I retained for my own use. I still have my FTb, which could definitely use a CLA. However, of all the Canon F series camera I own, my favorite is the TX.

Why? You ask. The TX, as we know, is a stripped down economy model FTb, with a shutter that goes to 1/500 of a second, no self timer, though it does have a depth of field preview lever, no meter switch, and for flash, a PC socket and a standard hot shoe, both for X sync only. Oh yes, no mirror lockup either. One important difference is that the TX uses center weighted TTL metering, not the semi-spot metering of the F-1 and FTb. So why do I like this camera so much?

Well, for starters, it has that same sturdy F series body that was introduced with the Canon FX/FP cameras of 1964. This means it feels the same as the Canon FTb's I've used over the years. Secondly, with a few exceptions it takes all Canon FL and FD lenses, from fisheye to super telephoto. Thus it makes a good companion camera to a FTb or even an F-1. As for the deficiencies, well, they are not as deficient as one might think. for example the 1/1000 shutter speed. Popular Photography tested an FTb when they were introduced and found that the 1/1000 sec. shutter speed tested out at about 1/750, about 1/2 stop slower than specified. So the 1/500th speed of the TX looks good in comparison. Also in very truth, accurate higher shutter speeds such as we have now are the result of motorized cameras, vertical traveling shutters and electronic control, none of which existed when the TX was made. As for the lack of a mirror lockup,nearly all wide angle lenses were retrofocus designs, which meant all Canon wide angles would fit on the TX. As for reducing vibrations with mirror lock up, research has shown that a camera mirror causes the most vibration as it comes back down, after the shutter has fired and exposed the film. As X sync only, by 1975 flash bulbs were on their way out as they were being replaced by variable exposure electronic flash units. All one had to do was set the shutter speed to 1/60th, set the lens aperture according to the scale on the flash unit, and fire away. Regular daylight and available light exposure was the same ring and needle match up as the FTb or F-1. However, the TX used center weighted metering, which gave priority to the center of the frame. This was compromise between

semi-spot metering, and full averaging metering with his problems with back lighting. It also means that the TX could use a standard linear polarizer, which was much cheaper in 1975. As for being a disadvantage, center weighted metering is now the standard, used even by cameras that have several metering patterns. So, then is the TX perfect.

Well, I do wish it had a meter switch. The intention was that you could shut off your meter with a lens cap on your lens. After all, CDS cells are essentially photoresistors, and the lower the light level the more resistance they give. Also, the TX used 1.35v mercury cells, which had a long life, even under load. Still, a switch is a switch, and assuming no defects, when the switch is off there is no current flowing from the battery. This would be helpful in these mercury less battery times.

Still, a discussion of the features of the TX doesn't quite explain why I'm so enchanted with mine. After all, this was a camera which, like the Pentax K-1000, was used for beginning photography classes in high school or college. However, mine is a good clean example, though it does have a few shallow dings on the base plate as well as the usual residue around the wind lever and shutter speed dial, which can be removed with lens cleaner. Still, it's due for a CLA, which I hope will happen soon. But, is this enough merit a special place among all my cameras?

My guess is that it's the sheer simplicity of the camera. In short, the TX is nothing more or nothing less than what it is. However, it's still a pleasure to use and I have taken many a family picture with it over the years. Finally, for some unexplained reason, this camera triggers a fantasy factor. In this case , it's the summer of 1976, and I'm hitch hiking through Europe with nothing more than what's in my back pack. Occasionally I get a ride, and for sleep I usually stay a youth hostel. And around my neck is my Canon TX with a Canon FD 50mm 1.8. In my backpack are several rolls of Kodachrome 64, a small electronic flash, and a Canon FD 28 2.8, a Canon FD 100mm f2.8 a. That's it, because what I wanted was scenics, portraits, and with 100mm and the extension tube, some close focusing details. Rather than lug the Kodachrome back home in my backpack, I bought prepaid mailers so I could send each roll back to the US and then to PO Box near my home. Finally, since all the lenses have the same filter size, I would also take a 55mm polarizer. I never took that trip, but given the amount of fantasy factor involved in photograph, I'm sure lots of people may have, or wish they had taken the same trip. End of story.

For the collector, Canon TX's are common, but not too common. The king of all Canon F series cameras is the F-1, followed by the EF, and the FTb. The two bargain basement Canons were the TX and the TLb. The TLb differs from the TX only in that it lacks a hot shoe, and for my money, I would prefer the TX to round out a collection. One detail, the TX was never offered with a black body. Which means it would match your chrome FTb. As per usual, conditon is everything, so make sure you're getting one from a reputable dealer or private individual. Here again, oftentimes a CLA would help whatever problems it may have. Of course the best thing to do is get froms someone who can put it in your hands, that way, you'll have a much better idea of what you are getting. Enjoy.

This camera is solid and based on the original Canon F-1 designs. It has few features but is a very capable performer with a smooth shutter and accurate meter. It's a great, inexpensive way to get into the Canon FD lens system.